The history of charcoal briquettes began when Ellsworth B.A. Zwoyer of Pennsylvania applied for a patent in 1897. But it was Henry Ford who helped popularized its use in the 1920s. 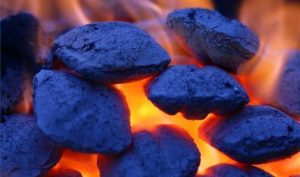 Early History
It’s not clear as to how Zwoyer came upon the idea of a briquette. But by the end of World War I, the Zwoyer Fuel Company had begun construction of charcoal briquette plants around the US. One of the earliest plants was set up in Buffalo, New York.

However it was Henry Ford (with some help from Thomas Edison) who put the briquettes to practical use in 1920. His briquettes were constructed from the wood debris and sawdust in his automobile factory.

A close look at the history of charcoal briquettes will point out that E.G. Kingsford purchased these briquettes. Kingsford would commercialize the briquette and mass produce them.

At first, briquettes were only available from Ford, but the Kingsford Company began manufacturing several of them. It just happened that Kingsford was Ford’s brother in law.

Ford agreed to focus on the auto industry. Kingsford would get in the business of selling charcoal. Kingsford Company would change its name to Kingsford Charcoal.

Types of Charcoal Briquettes
There are now several kinds of charcoal briquettes. Fuel types include mineral carbon, mineral char and wood charcoal. Starch is a binder while the limestone is an ash colorant. There are also some compacted briquettes. Some brown coals are then extruded into harder materials. These charcoals are primarily for industrial and residential use.

Other Types of Briquettes
Since the history of charcoal briquettes began, other variants have appeared. One of them is peat briquette. This type is made up of shredded peat. It doesn’t produce smoke and burns slowly. It’s also quite easy to move around. These are used as fuel fire although they can also be utilized for igniting a charcoal fire.

It is also a renewable energy source. Biomass briquettes are also cost effective compared to coal and furnace oil. This briquette type is becoming popular in some countries, India in particular. It is expected to become more widespread as it helps limit carbon emissions in the atmosphere.

The history of charcoal briquettes is controversial and still being debated.

But no matter how it started, its practical use has made it a mainstay in cooking and various industries.